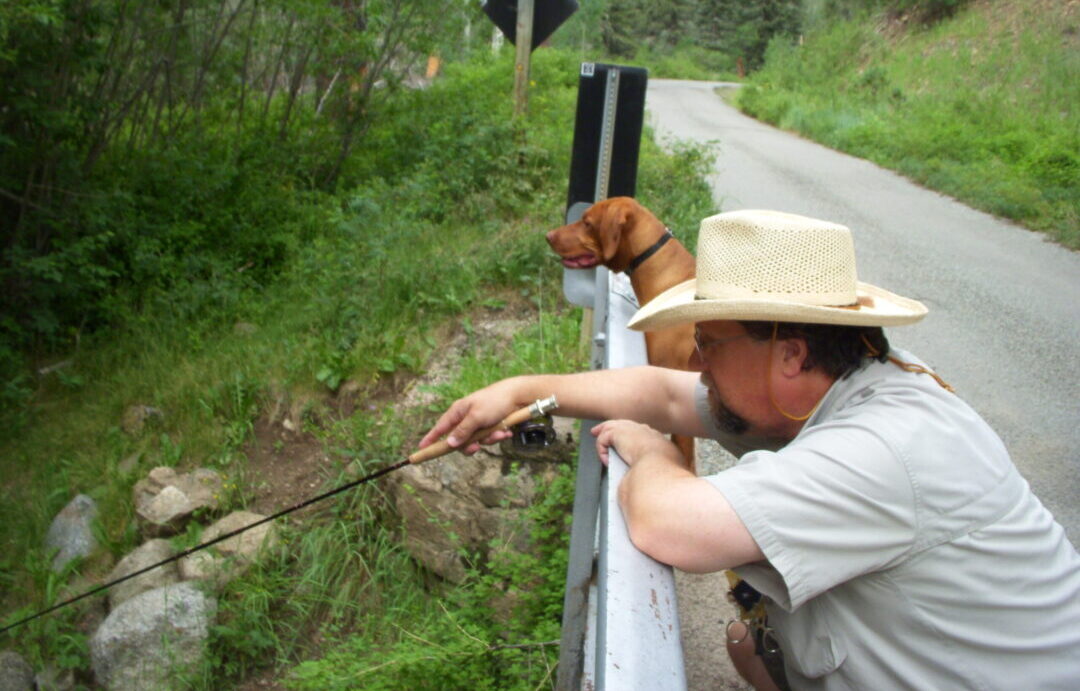 How did a geophysicist from Houston Texas end up teaching fly fishing on the Pecos River in New Mexico?

I wasn’t born with a fly rod in my hand, but my story is not uncommon among folks who end up becoming fly fishermen. I did develop an early interest in fishing during family visits to my grandmother’s lakeside home in northwestern Wisconsin. It was an interest that stuck with me as I grew up and traveled with my family throughout Latin America, where I lived in countries like Costa Rica, Chile, and Argentina. My interest continued during a tour in the Navy and reached maturation when I settled down to a professional life as a geophysicist in Houston on the upper Texas Gulf Coast. I spent about eight years as a conventional tackle fisherman, fishing for redfish, flounder, and speckled trout, before eventually developing an interest, and ultimately, a passion for fly fishing.

Experiences in northern New Mexico, more specifically in the Pecos Valley, are what cemented and probably imprinted trout fishing in New Mexico in my DNA.

My draw to New Mexico probably started in the 60s, when my father moved our family from one quiet college town in Appleton, Wisconsin, to another in Las Vegas, New Mexico, where he taught at New Mexico Highlands University for a year before we moved overseas. I returned to New Mexico as a University of Texas geology student in the early 80s during my summer field camp, spending six weeks field- mapping south of Taos and in southwestern Colorado. Several years later, I returned with my wife, Sandie, on a week-long vacation to Red River. By the end of the 90s, we were making regular visits to Santa Fe and later to Pecos.

Sandie and I were introduced to the Pecos River rather serendipitously when, during a visit to Santa Fe, we took a rather spontaneous fly-fishing trip with High Desert Anglers’ Jarrett Sasser. Our first casting lesson happened on the Cowles Kid’s Pond, and we attempted our first dead drifts of a dry fly on the river near the ponds. Our day ended in a last-minute, unexpected filling of my waders and a rather cold, soggy ride back to the hotel.

We have been drawn back each year since to fish the river and its many tributary creeks. Our visits increased in length until we were spending a full month in the mountains, alternating days of fishing, hiking, and camping. Our love of fly fishing also took us to many other great fisheries around the country; in Western states like Montana, Northern California, Utah, Arizona, Idaho, Wyoming, we fished for steelhead and trout of all kinds; and in the East, in Maine and New York, smallmouth, false albacore, blues, and stripers.

In 2009, we purchased the house that is now called the Santa Fe Fly Fishing School. I had developed a fly fishing school in Houston after receiving my Federation of Fly Fishers Casting Instructor certification. Expanding my business from casting instruction to trout fishing on moving waters seemed like a logical next step.

Our school sits at the edge of the Village of Pecos, at the end of Camino Rincon, on a big bend in the Pecos River. Along the cottonwood- and willow-lined river, we have groomed the stretch in front of our property to provide a variety of water conditions and an intimate setting to teach fly fishing techniques. We have ample space for casting lessons and plenty of relaxing places to sit and work on knot tying and leader assembly.

We hope that you’ll take this opportunity to schedule a day or two with us learning how to fly fish for trout on the Pecos River.